A good friend sent this to me last week. I asked whether I could copy this interesting story to my blog. What other day is more appropriate than posting it today, since it is Valentine's Day here in Malaysia.

February 14 is Valentine's Day. Although it is celebrated as a lovers' holiday today, with the giving of candy, flowers, or other gifts between couples in love, it originated in 5th Century

Rome as a tribute to St. Valentine, a Catholic bishop.

For eight hundred years prior to the establishment of Valentine's Day, the Romans had practiced a pagan celebration in mid-February commemorating young men's rite of passage to the god Lupercus. The celebration featured a lottery in which young men would draw the names of teenage girls from a box. The girl assigned to each young man in that manner would be his sexual companion during the remaining year.

In an effort to do away with the pagan festival, Pope Gelasius ordered a slight change in the lottery. Instead of the names of young women, the box would contain the names of saints. Both men and women were allowed to draw from the box, and the game was to emulate the ways of the saint they drew during the rest of the year. Needless to say, many of the young Roman men were not too pleased with the rule changes.

Instead of the pagan god Lupercus, the Church looked for a suitable patron saint of love to take 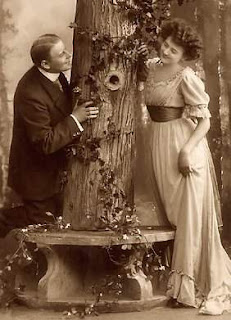 his place. They found an appropriate choice in Valentine, who, in AD 270 had been beheaded by Emperor Claudius.

Claudius had determined that married men made poor soldiers. So he banned marriage from his empire. But Valentine would secretly marry young men that came to him. When Claudius found out about Valentine, he first tried to convert him to paganism. But Valentine reversed the strategy, trying instead to convert Claudius. When he failed, he was stoned and beheaded.

During the days that Valentine was imprisoned, he fell in love with the blind daughter of his jailer. His love for her, and his great faith, managed to miraculously heal her from her blindness before his death. Before he was taken to his death, he signed a farewell message to her, "From your Valentine." The phrase has been used on his day ever since.

Although the lottery for women had been banned by the church, the mid-February holiday in commemoration of St. Valentine was still used by Roman men to seek the affection of women. It became a tradition for the men to give the ones they admired handwritten messages of affection, containing Valentine's name.

The first Valentine card grew out of this practice. The first true Valentine card was sent in 1415 by Charles, duke of Orleans, to his wife. He was imprisoned in the Tower of London at the time.

Cupid, another symbol of the holiday, became associated with it because he was the son of Venus, the Roman god of love and beauty. Cupid often appears on Valentine cards.

Lovely story. I did not know of this fact. Thank you for sharing it.