Forgetful me! Where was my wrist watch? It was not on the shelf - that was where I would home it! Gosh! Thursday night I had removed it from my wrist and slipped it into the pocket of my skirt! Friday (yesterday) morning the skirt was soaked for 2 hours, then machine washed and spun. I didn't checked the pocket before I soaked it in the pail neither did I checked it when I hanged it up to dry! As I feared, it was in the pocket. 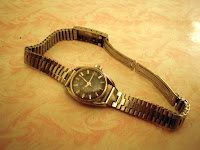 It is an old mechanical/automatic watch. It wouldn't sell in the market. There is no monetary value in it, but it is of sentimental value to me because my mother gave it to me.

I pulled out the winding knob and turned the minute hand to when it should read, pushed back the knob and winded it. The second hand moved! It was still working!

As time passed, water vapours appeared on the inside of the face glass. As advised I buried it in the raw rice grains and left it buried overnight. There were no water vapours when I retrieved it this morning but they appeared again when I wore it on my wrist. I dried it under the sun. I placed it near my gas burner while food was cooking on the stove. I wonder when it would be dry completely and I hoooooooooooooooooooooooooooooooope and pray that it will continue to function.
Posted by Irene at 8:48 AM

Sorry to read about your watch. Getting forgetful goes with our time of life, I'm afraid (BIG smiles). You should assist the drying of the wach by removing the back of the watch to allow all the moisture to evaporate because there will certainly be some moisture trapped in there even if you think it is dry now. Maybe you have a friendly watchmaker nearby that will help.

I did think about bringing it to the watch shop that I usually visited but didn't make that a priority because I didn't have any business in town. Well - must do that this Monday. You are right - there will certainly be some moisture trapped. Thanks!

the water is trapped inside the watch,
when at room room temperature the water will not condense on the cover, but when u enter a colder room the water vapour will condense on the cover,, ,,
if u leave it like this for sometime the gears and sharp ends will get rusty and u will need replacement..
so go and get it serviced ,, in the beginning u should have ask someone to oepn it and like it dry up but now u need to service it