What to do with damaged currency notes?

A torn 50 MRinggit currency note. Don't know what happened to it. We found it among our late father's possession. The rest of the family said it cannot be used anymore. I can't believe my ears! 50 MRinggit may be nothing to the rich but it means a lot to the poor. There must be a system whereby the government would take back damaged currency notes - torn, scratched, scorched, smeared, etc. 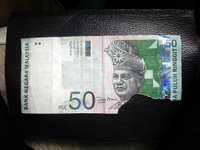 Asked my friends, who worked in the banks. One told me maybe the bank that I frequent, might take it from me and give me a new 50 MRinggit note. Another said the only bank that would take it back is Bank Negara Malaysia (Central Bank of Malaysia). An officer in the bank that I frequented told me that only Bank Negara Malaysia would take it back and give me in return an amount, according to the damage.

Well, since I am here in Kuala Lumpur, the capital city of Malaysia, I had the opportunity to visit the head office at Jalan Dato' Onn. We were lost looking for it, since we have never been there before. Glad we were lost because it gave us the opportunity to discover places of interest that I have not been. And happier still I got 50 MRinggit, not more or less, for the torn currency note.

I met one elderly couple who brought notes that have been torn and worn out, and looked like the cockroaches have their share on them as well. I am glad that BNM will be exchanging them for new notes that they could use.

Now, we know where to go to if any of of our MRinggit notes are damaged. We can also bring any old notes, that are no more in circulation, that we do not wish to keep or collect!!
Posted by Irene at 2:54 AM

Hi, I didn't know that a torn currency note can still be accepted. I learn something from you. :o)

Glad I have shared this finding. I am sure many out there are ignorant of this too. Please share this knowledge with your friends.

In the UK our notes have the serial No. printed on them twice; on left & on right of the main side. This means that, if torn, as long as both the serial numbers are with the note it is legal tender and can be exchanged anywhere, but usually at any bank. If you only have one serial no. you can be out of luck as another person may have the other bit with the serial no. on it too and can try and claim money with that half too! So, a long time has to pass before you can be reimbursed and only if the other part has been lost for a 6 month period. What are U going to do with the £7.20?

I think our BNM will not reimburse if the serial numbers are not there also. I am not sure. I didn't ask about that. The serial nos on mine were still there. We have 1 on the right and 1 on the left too. It makes sense that both should be there, even though it is worn out.