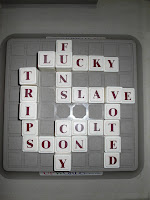 There are many different types of board games in the world. I love board games. So far I know how to play cards (only certain games), chess, checkers, monopoly, mastermind, scrabble, Uno.

Upwords is similar to scrabble but it is more fun and challenging. I rather play upwords than scrabble anytime unless the former is not available!

Thanks to Sis Monica, who showed me the game for the first time, when I visited her in Melbourne. She bought me a set to bring back to Miri.

Tonight I had a fun time playing with my Sister-in-law Caroline and a friend Jane. And for the very first time in my experience playing with the upwords, we were able to use the remaining tiles, left on the players' racks, to make words on the board!