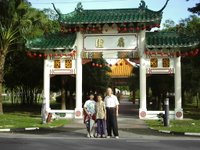 I was careless! I tripped over a chain at the Miri City Fan. I had wisely walked around the chain when I passed the entrance, to take pictures of my mother, uncle and sister from across the road, opposite the Chinese garden. But I didn't walk around when I returned. 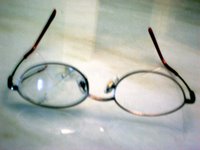 The next thing I knew was my face is on the ground of the walkway to the Chinese shed.

Sister was at my side, asking me whether I was feeling okay, whether my eyes were okay.

The lower part of my left palm felt a little painful. I guess I have stopped my fall with my palm. It happened too fast. My right hand was holding the digital camera. The right hand and the digital camera was alright. But the right glass of my spectacle shattered - the pieces were on the ground.

(The pair of spectacles was only less than a month old! I had collected it at Sungei Wang, Kuala Lumpur, on the 8 May.!

I touched my forehead. It felt like a lump! And big as well! Uncle Ni told me to sit down on the bench of the Chinese shed and he would apply his 'chi kung' on me. He used his 'qi-gong' on me for a few more times that day.

Mother and Uncle do not know how to drive; Sister was not familiar with the car nor the roads. I was thinking who I could phone for help. In the end I wore my spectacles (with one glass on the left only) and drove home. Funny, the right eye adjusted itself. It was as if both sides of the glasses are intact!

Thank God, my eyes were okay! And I am okay too. I didn't feel any giddiness.

Tuesday, 30 May 2006
"Qi-Gong" worked! The lump was almost gone but................ I look terrible this morning. The area between my eyes felt swollen and blue marks have appeared on both sides of the nose, around the eyes! Looked like I have been abus

The forehead looked and felt better. The marks around the eyes are not blueish anymore, but reddish.

My eyes! I had double eyelids - where are there? Don't know how long will it take for me to fully return to normal?

ouch...that really looks painful! But you also got me curious about qi-gong. I hope you're better now. Take care and I pray for your speedy recovery.

OooH how awful for you. I see the pain just looking at the photo. I hope you are much better now. And what about your glasses? Did you need to buy new ones?

I am much much better, thank you Singapore girl & milky bar kid. Except for a little hump on my forehead and shadowy marks on my cheek bones, I feel great! Qi-gong - Uncle Ni tried to use his inner energy to heal me!