Final night of the singing competition, of the , in conjunction with the National Day celebration. This was the first singing competition organized by the school for her students, at the school hall. I had been selected into the final of the English and the Mandarin Section. I must be good! I had been practicing hard at a junior’s home but not hard enough to get a prize in both sections!

In the Mandarin section, I sang “心上人” (sound like “Sing Sun Lern” literally in English mean “the person of my heart”)(by Chang Siao Ying) and got 3rd. My prize was a fountain pen and a bottle of ink. 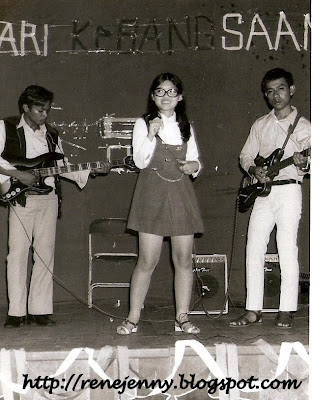 In the English section, I sang “All I have to do is Dream” (by the Everly Brothers). I thought I did very well but alas! I didn’t get a prize! But nevertheless, an enjoyable experience.

Thanks JosephBHC for the following translation of the song you sang:

时光一逝永不回，往事只能回味，忆童年时时光一逝永不回，往事只能回味，忆童年时竹马青梅，两小无猜，日夜相随。春风又吹红了花蕊，你已经也添了新岁，你就要变心像时光难倒回，我只有在梦里相依偎.
Time Passed will never return, the past left only Memory. Our childhood is like time that passed without return, the past left only memory. Remembered the puppy love when we two were together day and night. The Spring breeze have blown red the flower bubs, you also added another year on your age. You are going to change like time that past without return. I can only be with you in the dream.

Then there was PeterL, JohnC, KCFook, CWCheong, IbrahimK, AlisonCFY, MaryS. And then he said one of the Form 4 students sang "I started a joke" (Bee Gees). Thanks, Joseph, for helping to update my blog posting with the additional information you provided. THANKS A LOT.

School Leavers’ Campaign – Social Gathering – Miri Community Hall. My singing fever has not subsided and so I volunteered to sing again the English song that I sang at school, even though I did not get a prize.. I just like “All I have to do is Dream” so much. Good thing, it was not a competition.

I don’t remember exactly when. No photo no record. But I do remember taking part in a singing competition at a fun fair, organized by the Lutong Jaycees in Miri. Another attempt singing in public. This time I sang “Paper Roses” (Marie Osmond). Frankly speaking I was nervous but didn’t go flat as in the following year.

Singing competition organized by the Lutong Jaycees at the Miri Community Hall. Chose “The Twelfth of Never” by Donny Osmond. How did I do? Well! I went flat and got booed! Luckily I was not thrown with rotten eggs or anything else, hahaha.. That was the last time I took part in a public singing competition. Would I do it again? Maybe, if I have enough training and courage.. Would I continue singing? Yes, of course!

30 years later. No. I have not taken part in any public singing competition. I am happy just to sing with my friends at the karaoke lounge, party, home and church.

Sing….. Sing a song….Don’t worry it’s not… good enough for anyone else to hear, just sing….Sing a song…. (by the Carpenters???)

I got here from Lyanne's blog and enjoyed your sincere sharing of your thoughts and events.

Can I put your link in our family blog?
The Chongs Family

Thanks! You're linked now =)